We are all about those who love to explore food, locations and health

We have sorted out the Top 10 Historical Places in Delhi you must visit! These places hold quite a Historical importance that we all must know!

Our country is the political capital of India – Delhi and that is why it is famous. But it is not that this is the only reason for its fame. The history of India is connected with Delhi. Many stories of the rule of ancient kings and emperors are associated with this Delhi and if you talk about the present, then whatever you look at, you will definitely find something that will be connected to Delhi. Seeing which you will be surprised and your eyes will stop on that side.

Whether it is Delhi’s political corridors or business news, Delhi’s bitter winter or the delicious dishes found here. You will find so many places to visit here; you will be confused to think, which one to see 1st.

Historical places in Delhi with names to visit

Lodhi Garden: is a park located in New Delhi. Spread over an area of ​​90 acres, it is protected by the Archaeological Department of India which contains two important mausoleums of Lodhi and Muhammad Shah. Apart from the mausoleums, the garden also houses a large dome and head dome. All these marvelous structures of architecture date back to the 15th-century rulers of the Lodhi and Sayyid dynasty, who were then the rulers of most of northern India.

Lodhi Garden, situated between Safdarjung’s Tomb and Khan Market, is a popular place for health-conscious people in Delhi as it is an ideal place for a walk in the morning and evening.

A glimpse inside the memorial: Tomb of Sikandar Lodhi – This mausoleum of Sikandar Lodhi was built by his son in 1517 AD. It is a simple quadrangular structure situated on a platform on which it was renovated by the British while tracing the saga of Ibrahim Lodhi’s defeat by Babur. Muhammad Shah’s Tomb – This was the first tomb to be built in Lodhi Garden. It was built by Alauddin Alam Shah in 1444 AD in honor of Muhammad Shah, the last ruler of the Sayyid dynasty.

Bada Dome – As its name suggests, it is a large dome and serves as the gateway to a three-domed mosque located nearby. Both the dome and the mosque were built in 1494 AD by Sikandar Lodhi, the then ruler of this place.

Sheesh Dome – Sheesh Dome means glass dome. It got its name because of the shiny tiles used in its construction. The dome has the remains of a family whose identity is not known. The Sheesh Dome was also built during the reign of Sikandar Lodhi.

According to a legend, this ancient fort was discovered by the Pandavas on the banks of river Yamuna which is more than 5000 years old and was built before the Mahabharata period. Researchers have confirmed that Chahar of Purana Qila had a small hamlet named Indraprastha inside the wall. It is also believed that Humayun’s capital Day Din Chhaan was also located here, which was then later renovated by the first Afghan ruler of India and named it Shergarh.

With this, Akbar’s coronation took place in this palace after the last Hindu ruler of India, Emperor Hem Chandra Vikramaditya alias Hemu defeated the forces of Akbar in Delhi and Agra in 1556 AD. 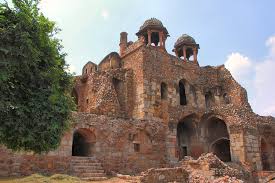 However, this fort is believed to be inauspicious for rulers like Humayun, Sher Shah, and Hemachandra, who ruled from here. There are many interesting buildings around the Purana Qila including the Qila-e-Kuhna Mosque built by Sher Shah, the octagonal red sandstone double-storeyed Lion Sher Mandal, the mosque of Karul Manzil built by Maham Anga, the mother of Emperor Akbar and the southern door for Shergarh are included.

There are bastions on both sides at the three gates of the fort’s strong and thick walls. These walls are 18 meters high and one and a half km long with three arched gateways to the west with the Bara Darwaza, Humayun Darwaza in the south, and the Taluk Gate, also known as the prohibition gate. All three entrances are huge two-story structures with bastions on either side, as well as balconies or jharokhas and sambhayukt pavilions.

Presently, Purana Qila is a place where a visual audio show of the history of Delhi is organized every evening.

National Museum It is one of the largest museums in India. Various types of ancient heritage are stored here for viewing. Its maintenance etc. is borne by the Ministry of Culture. It is located near Janpath and Maulana Azad Road.

Although there are many places to visit in Delhi, the point of Red Fort is something else. Every year on the occasion of Independence Day, the Prime Minister of India hoists the flag at the Red Fort and addresses the country. Historically important Red Fort was built by Shah Jahan. It was named Red Fort because it was made of red-colored sandstone. Inside it are the memorable buildings of Diwan-i-Aam, Diwan-i-Khas, Rang Mahal, Khas Mahal, Hamam, Naubat Khana, Heera Mahal, and Shahi Burj.

Agrasen’s Bawdi is a unique and interesting monument in Delhi. Eclipsed by the city’s high and modern buildings, only a few people are aware of this historic stepwell in the area of ​​the national capital.

Agrasen’s Bawdi is a historical monument maintained by the Archaeological Survey of India. Located on the Hailey Road near Connaught Place, it is a 15 meter wide and 60-meter long artistic stepwell. It is thought that no one knows about the person who built it but legend has it that it was built by the great king Agrasen of the Mahabharata period and was rebuilt in the 14th century by members of the Agrawal community.

This well has 103 steps leading to the base in which water was collected at some time and which is made in five different levels. Unlike other traditional step-wells which are mostly circular, it is in a different shape with a raised platform with a roof and not a roof at the other end, but a shadow of a large Neem tree. Today there is no water in Bawdi but this well is home to many pigeons and bats. This monument has been protected by the Archaeological Survey of India under the Archaeological Sites and Remains Act 1958.

The All India War Memorial, popularly known as India Gate, is located along the Rajpath in New Delhi. It is often compared to the Arc-de Triomphe in France, the Gateway of India in Mumbai, and the Arch of Constantine in Rome. This 42-meter tall historical structure was designed by Sir Edwin Lutyens and is one of the largest war memorials in the country. India Gate is also famous for hosting the Republic Day Parade every year. If you want to know more about World War I, then you must visit India Gate once.

Located at the epicenter of New Delhi, India Gate is the 42 meters high India Gate which is in the form of a vaulted “arch-the Triumph”. It has a memorial of 70,000 Indian soldiers, in line with its French counterpart. Who Wrote World War-. During the British Army lost its life. The monument bears the names of over 13516 British and Indian soldiers killed in the northwest frontier (now northwest Pakistan) during the Afghan war-1919.

The foundation stone of India Gate was laid by the Honorable Duke of Connaught in 1921 and was designed by Edwin Luton. This monument was dedicated to the nation after 10 years by the then Viceroy, Lord Irwin. Another monument was established long after the independence of Amar Jyoti. This Amar-Jyoti burns day and night under the arch, reminding the soldiers who died in the Indo-Pak war of December 1971.

Humayun’s tomb is the mausoleum of Mughal ruler Humayun as well as other rulers. This historical monument is a perfect specimen of Persian architecture. This mausoleum is the first monument where the red stone has been used on such a huge scale in making a mausoleum. Humayun’s Tomb has been declared a World Heritage Site by UNESCO.

This magnificent mosque of old Delhi is the largest mosque in India. Its courtyard can contain up to 25,000 devotees. Its construction began in 1644 and the Mughal emperor Shah Jahan, who built the Taj Mahal and the Red Fort, was the hallmark of his last highly expensive architecture.

Visitors can hire robes (robs) from the north gate. Here you will wear the local dress and look like the residents here.

Soon, after the defeat of the last Hindu ruler of Delhi, in 1193 it was built as a 73-meter high Vijay Minar by Qutubuddin Aibak. This building has five floors. Each floor has a balcony and its base is 1.5 m. The diameter is 2.5 meters in diameter at the top gradually decreasing and the first three floors are made of red sandstone and the fourth and fifth floors are made of marble and sandstone. Adjacent to the tower is the first Quatul-Islam mosque in India.

It is built from its ruins by breaking 27 Hindu temples. “There is a 7-meter high iron-pillar in the courtyard of this mosque. It is said that if you surround it with a back, it will be your wish. Will go.

Read more articles here: 10 Best places to visit in Chandni chowk in Delhi, 23 Best places in Shirdi to visit around

What are the top historical places in Delhi?

Why one must visit Historical places?

Delhi has been the epicenter of cultures, transportations, politics, and commerce for a very long time. These places hold quite a Historical importance that we all must know! About tradition, how the kings worked, the development of their dynasty, the architectural design, the idea behind making these monuments, etc. knowing these monuments is just like knowing Delhi.